What We DoSyndicated ReportsBrand Love StudyDeliverablesClientsTeamNewsGiving BackSay Hi
Through sponsorships and giving initiatives, Smarty Pants is committed to making a difference in our communities. 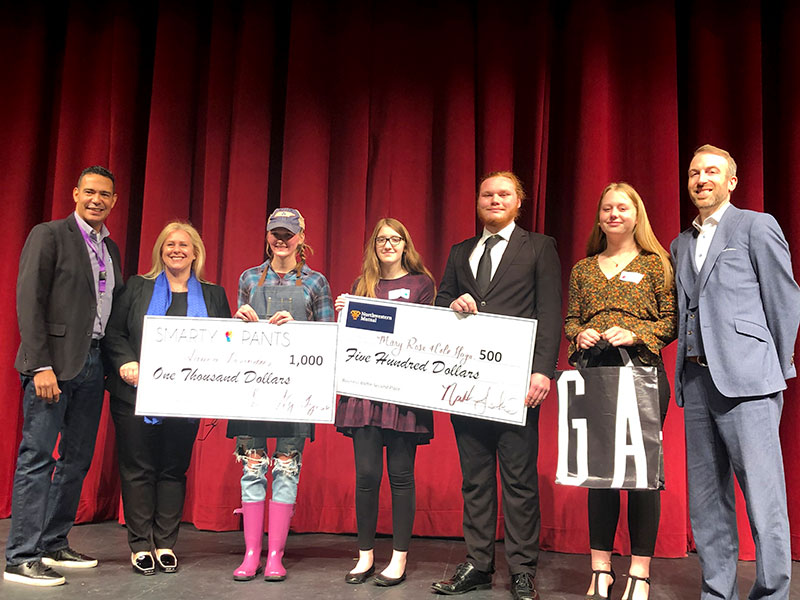 Each year, four members of the Smarty Pants leadership team serve as “sharks” who evaluate teens’ business ideas. These sharks, complemented by other business leaders in the community, award winners $1000 in seed money to start their endeavors or further their educations. Runners up receive a $500 investment in their futures. 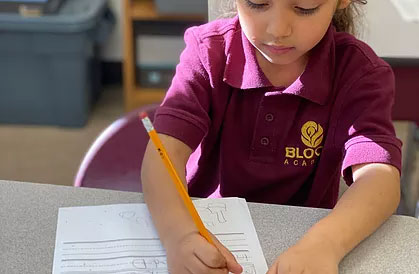 In early 2018, we visited Houston to learn more about our 2017 giving initiative and the families/communities that remained in need. We saw first-hand the disparity between Houston's highest poverty zip codes and were struck by the absence of quality education for its youth.

So, in 2018, we upped our giving game by helping build Bloom Academy, a tuition-free, college prep school in Southeast Houston. We directed funds to three specific areas: creation of a library for young learners, procurement of play equipment to help students stay active and bright, and purchase of school uniforms for those with limited means. We are thrilled to support young people eager to succeed! 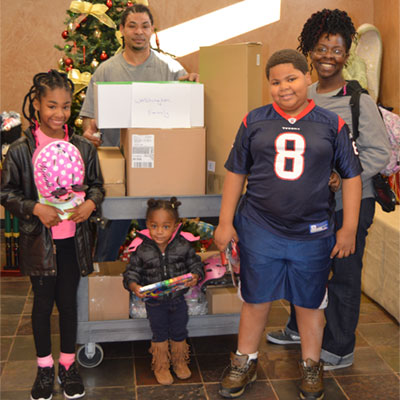 After Hurricane Harvey wreaked havoc on millions of families in Texas, Smarty Pants knew it was time to help. We connected with an amazing local charity in Houston to help families get back on their feet. We provided Christmas gifts for dozens of kids and helped adults with home goods, necessities, and gift cards to fill in the gaps. Our year-end giving topped $20,000 for deserving families. We were also fortunate enough to support a few families in need in our local Smarty Pants markets. 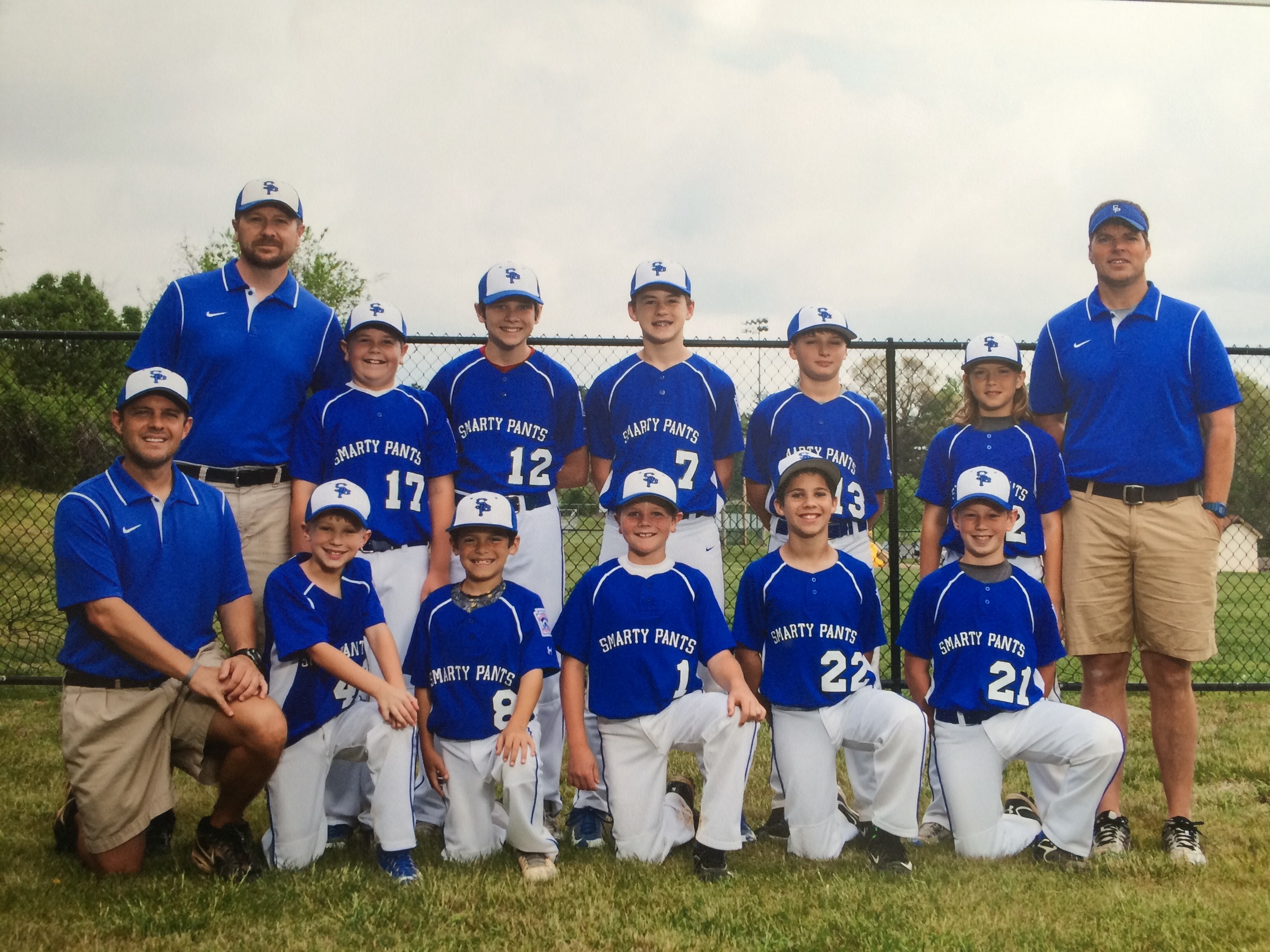 Another great year is underway with the 2016 Smarty Pants Little League team.  This year the team adds a new coach and several new players who are ready to hit it out of the park, literally.  We’re excited for the season to unfold and to watch the kids grow. 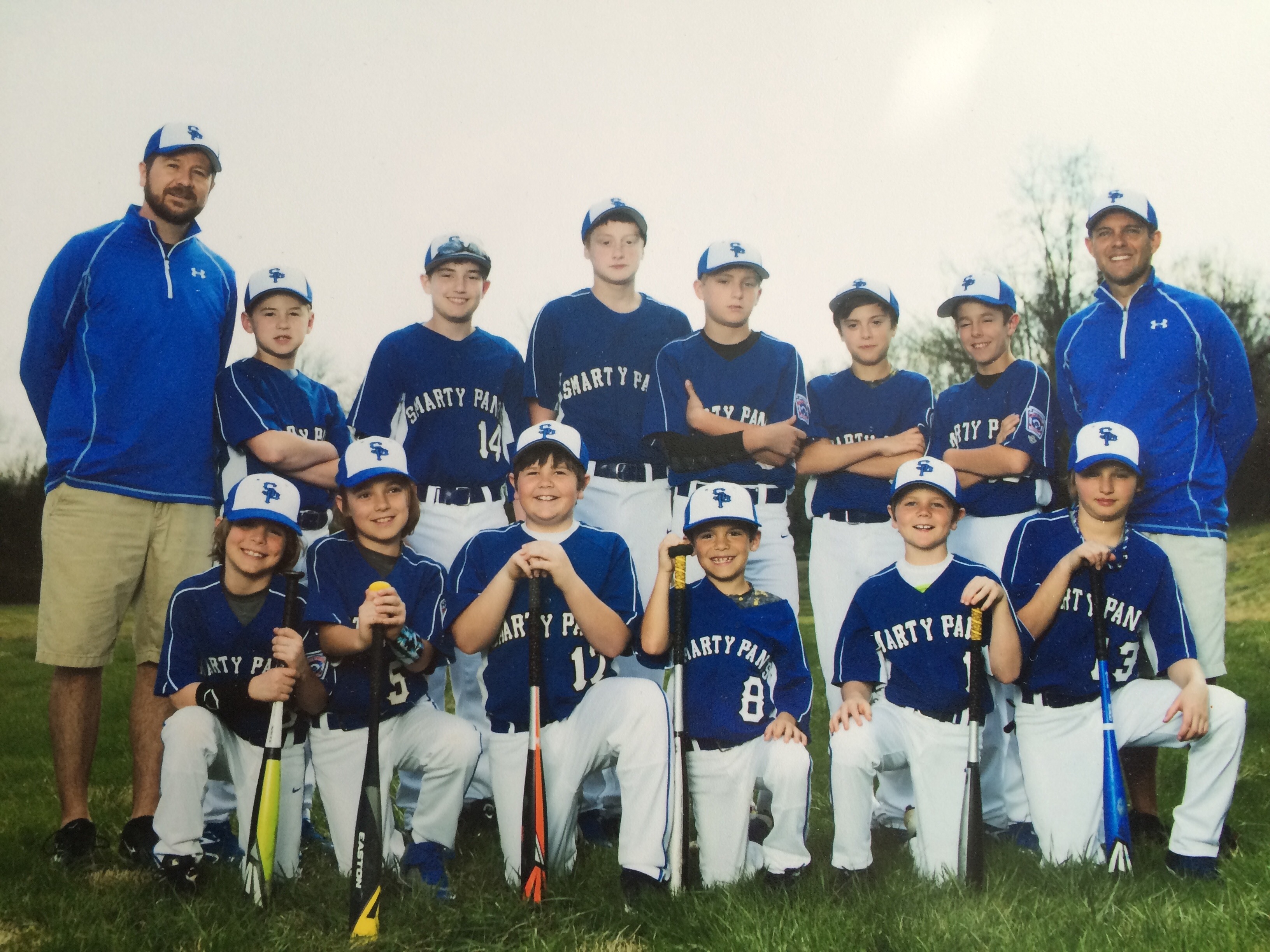 We were sad to see the 2015 Little League season come to a close in Johnson City.  The team placed 2nd in the league and made great strides in their talent, sportsmanship and maturity.  Eight kids were placed on various all-star teams.  Woo hoo!  We can’t wait to see what’s in store for new year. 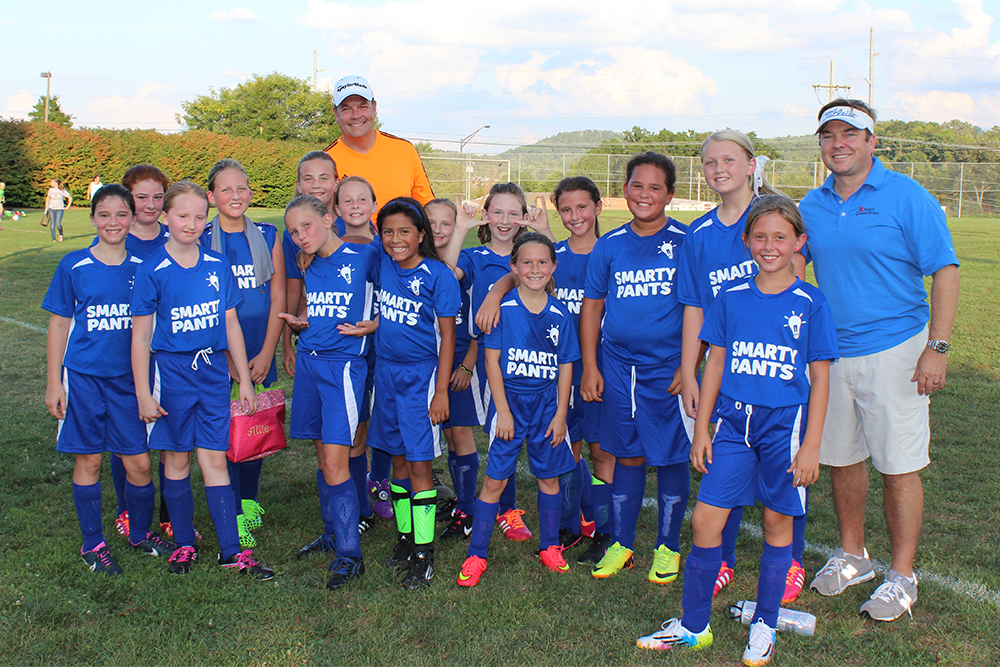 The 2014 Smarty Pants soccer team are a great group of girls. Most of them have been involved in sports together since the age of 6. Their off-the-field friendships combined with their on-the-field energy and enthusiasm, should make for a very successful season and provide a wealth of fun to watch tween girl insights. 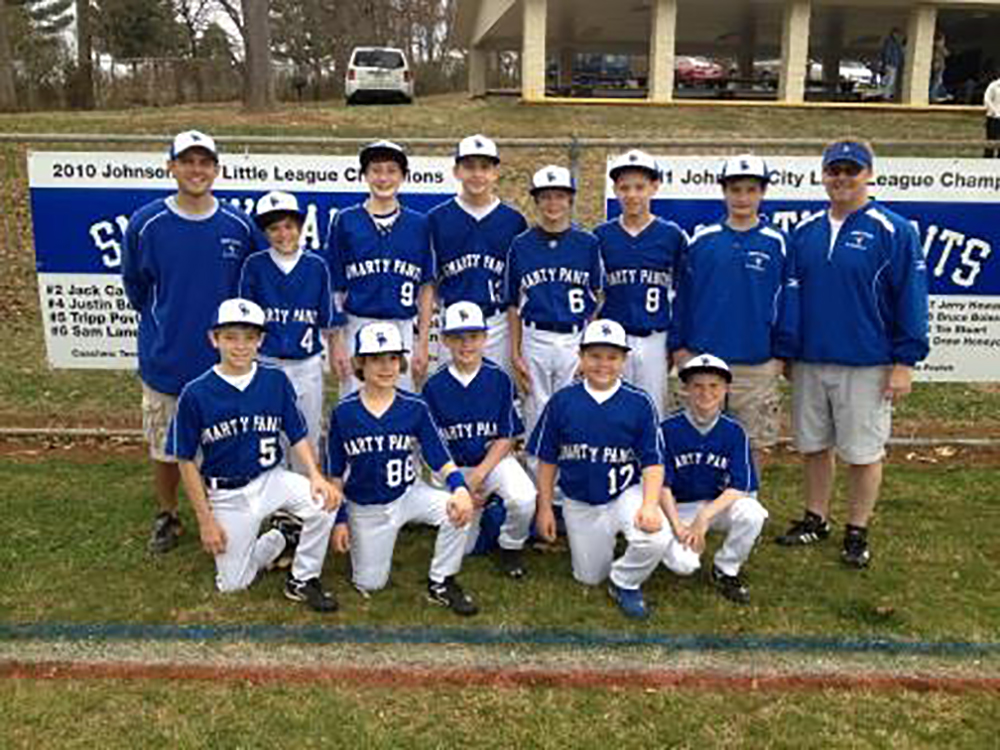 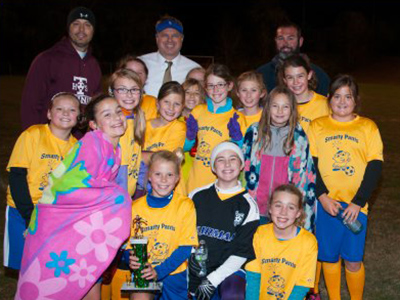 We are so proud of this year's Smarty Pants girls soccer team. Based in Johnson City, TN, the team consisted of 14 fifth graders and 1 sixth grader. They had a great season with a record of 7 wins, 1 tie and 2 losses. The team worked so hard and experienced so much growth as a team and personally. Thanks so much to Jamie Polvich, who once again served as the Smarty Pants coach, and to all of the parents who were gracious enough to share their girls with the Smarty Pants extended family. 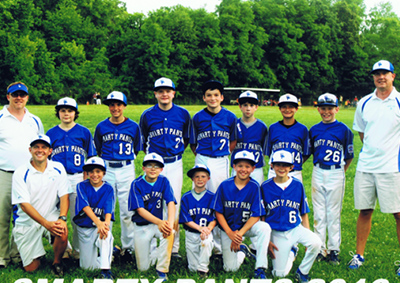 The 2013 Smartly Pants Little League team finished 3rd in a very tough Johnson City American Little League, with an overall record of 13-12. Five Smarty Pants pitchers combined to throw four no hitters on the season, while striking out 273 batters in just over 128 innings. On the offensive side, Smarty Pants hitters combined for 131 hits and 150 runs against some of the strongest pitching the league has seen in some time. This on the field success resulted in six Smarty Pants players being selected to JCALL All-Star teams, all of which swept area district tournaments and qualified to travel to the Tennessee State Little League competition in the 9-10, 10-11 and 11-12 age divisions. Great job Smarty Pants. 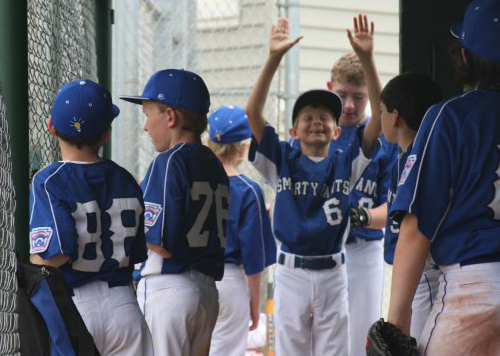 The 2012 Smarty Pants Little League team was a fun loving bunch of kids. They were not the most talented group we’ve ever had, but this group accomplished more with less, than any group we’ve had. They were out to have fun. The wins and losses didn’t matter nearly as much to these kids as having a great time at the park. With that in mind, they still had a great year statistically. They finished 2nd in the league and made it to the final 8 in the city. Their zest for life and fun carried them further than any of us imagined they could go. They were light hearted, fun-focused and a great group to coach and sponsor. They learned to hit by taking their light sabers, aka: baseball bats, and cutting the baseballs in half on their way to the plate. Way to go SP. We’re very proud of you. 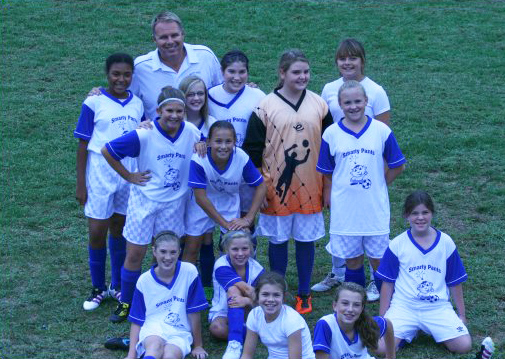 Congratulations City Champions!! This group of 10-11 yr. old girls worked hard, had great attitudes and were crowned champions of their age group in the Johnson City Parks and Rec soccer program. We are proud of them. As a staff, we love watching kids like these grow and learn about life through sport. 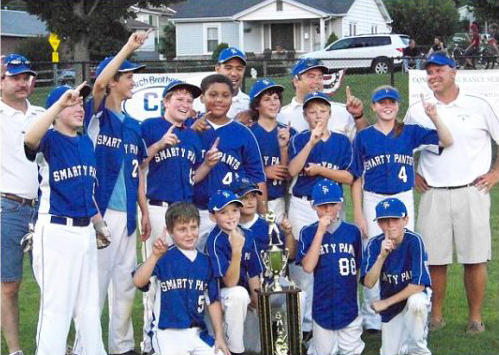 2011 brought another wonderful group of players and families to the Smarty Pants Little League "family." We had a great group of talented players with an awesome work ethic and attitude. They not only won the American League championship, but they also won the city-wide Little League championship. We are so proud of them! Our staff and coaches firmly believe that organized sports are great prep for adult life. We have no doubt that the effort, enthusiasm and teamwork the boys and girls have shown will serve them well as they become adults.